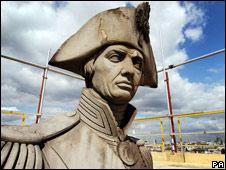 A statue of Admiral Nelson can be seen in Trafalgar Square

France and Britain are standing shoulder-to-shoulder in a new defence alliance.

The British Prime Minister David Cameron and the French President Nicolas Sarkozy signed two new defence treaties this week that include joint training exercises for a new Anglo-French rapid reaction force and the shared use of an aircraft carrier.

The two countries haven’t always seen eye-to-eye. Their common history has been peppered with conflict that goes back as far as the Battle of Hastings in 1066, when the Duke of Normandy invaded England and became king of the country.

The English, on the other hand, like to remember the Battle of Trafalgar, won at sea in 1805 against an alliance of the French and Spanish navies. It curtailed Napoleon’s ambitions to control Europe.

Napoleon and his enemy, Admiral Nelson, have captured their people's imaginations. Nelson now sits on top of his column in Trafalgar Square keeping watch over the sea.

The 1904 Entente Cordiale (or cordial agreement) brought an end to centuries of regular wars, and the two countries have been allies ever since, most notably in the two world wars. But there have been rocky patches that include different views on localised conflicts like the Iraq war.

Now both are back together in what has humorously been dubbed the Entente Frugale (or frugal agreement). The British and French governments are short of money and have been forced to implement austerity measures in their defence plans. Mutual suspicion that is ingrained in the British and French has given way to a pragmatic alliance.

The people of the two countries have a love-hate relationship and joke about their rivalry. The French like to say that their neighbours across the Channel are bad cooks. The British think that the French look down their noses at them.

But the Brits also appreciate the je ne sais quoi that only French culture provides.

Many British holiday-makers love nothing better than to have a glass of champagne in a Parisian cafe by the river Seine.

The French like British music and some of their rock bands are now recording songs in English.

Maybe this could be the beginning of a beautiful friendship. Long live the Frugal Agreement! Vive l’Entente Frugale!