The South African government has urged people to attend local rather than national services of commemoration for Nelson Mandela as the sheer scale of the logistics involved in planning the extraordinary week ahead began to bring signs of stress.

An unprecedented number of foreign journalists and foreign dignitaries have arrived in the country along with tourists to witness what will be a historic event.

There were disgruntled scenes on Sunday at Johannesburg's Nasrec Expo centre, where several hundred of the estimated 2,500 to 3,000 national and international journalists covering the death of the former president arrived to collect passes that would grant them access to key events of the week.

A broken printer meant waiting for two to four hours for the all-important yellow photographic credentials. The vast car park was a bedlam of swearing in many languages, with one or two journalists from local media skipping the queue by appealing to officials in Xhosa and Afrikaans.

"This is African time, little angry one," said a Johannesburg radio reporter from Jacaranda FM, pushing past a Japanese television producer.

Tempers were fraying. "We have 10 people waiting here who should be out there working," said Trust Dube, of the Dimension television company. Jan Muller, with a German film crew, said: "This is terrible because we need to be other places. Very stressful."

An enterprising ice cream seller was soon on the scene.

There were tensions between media outlets at some church events as cameras could barely film without getting another camera in the shot. Many of Johannesburg's 165 hotels were full, although no room rate hikes have been reported.

Marie Marguerite, 54, from Ohio in the US, was arriving at the Hilton with five friends after a 14-hour flight. "We have followed Nelson Mandela's story all our lives and our church supports his children's fund, so we came. It's a moment of history and we wanted to join with our president in showing that everyone loved Madiba."

President Barack Obama is expected to enter South Africa this week, along with VIPs in their hundreds. Thirteen heads of African states have confirmed attendance at Sunday's funeral.

Former US presidents attending include Jimmy Carter, Bill Clinton and George W Bush, plus their wives and 26 congressmen. Ban Ki Moon and Kofi Annan are on the list. Francois Hollande, the French president, is coming, bringing the 2012 election rival, Nicolas Sarkozy.

Dilma Rousseff, the president of Brazil, will be accompanied by four former heads of state, including Lula da Silva.

Representations from the UN, the European commission and the African Union are also growing in number along with celebrities and musicians including Richard Branson and Peter Gabriel.

Plans were drawn up a year ago for the event, but the numbers appear to have shaken even the best-laid plans.

The government warned that people who wished to attend the memorial service on Tuesday in the 95,000-seat FNB football stadium in Johannesburg could face being turned away, even at the overflow venues. The message arrived along with promises that at least 90 giant screens would be set up at "official mourning sites" in all of South Africa's provinces.

A statement released by Pretoria stated: "People must accept that at some stage this capacity will be filled and police and other authorities will turn people away. Government is doing all it can to allow as many people as possible to be part of these official events, but there are limits to how many people we can reasonably accommodate."

Roads have been closed around the country's main cities and at Qunu, Mandela's Eastern Cape home town, where the burial will take place. Roads there have been closed for several miles around Mandela's pink-walled house, causing consternation to the huge media contingent with its camper vans, satellite dishes, tents and big vehicles.

South African Airways is organising extra internal flights to East London airport in the Eastern Cape, and temporary extra infrastructure. But Mthatha airport, the closest to Qunu, has been set aside for heads of state, with its airspace closing to all other traffic from Friday, grounding many of the helicopters hired by news outlets. VIPs will be driven by luxury coach to the graveside.

Noxolo Kiviet, premier of the Eastern Cape, said the electricity, banking and retail sectors were ready for the influx, but there was little accommodation. She asked residents to help.

"I appeal to Eastern Cape citizens to open their homes and accommodate visitors to our province."

That request may have been heeded already. Thinus Ferreira, a South African blogger, claimed that Qunu residents were charging reporters 10 rand (about 60p) to use their long drop, or earth ditch, toilets. Meanwhile security was tightened in Qunu and there is a heavy military and police presence.

On Sunday line and kerb painters were out in force around Soccer City in Johannesburg, and potholes were being filled on routes in Pretoria along which Mandela's coffin will pass from Wednesday to Friday, when it is driven to lie in state in the Union Buildings each day and returned to the mortuary each night.

When Mandela reaches his final resting place on Sunday, it is believed his gravestone will convey a simplicity his funeral cannot. He asked for it to be inscribed with just the word Mandela. 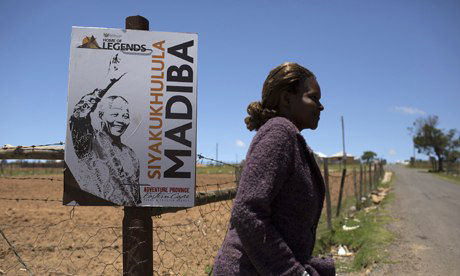