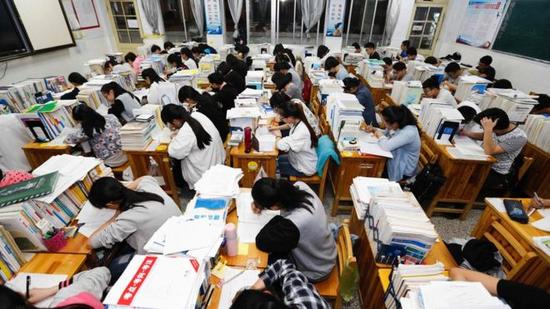 A Chinese city has banned high school students from tearing up textbooks or yelling in hallways to relieve exam pressure, state media said.

The ban, issued by the Xiamen Education Bureau, comes 10 days before the National College Entrance Examination.

An "unconventional measure of blowing off steam before the exam has prevailed in recent years, with students tearing their textbooks into pieces and throwing them off the school building.

Some choose to yell in the school buildings to cheer themselves up as well," CCTV said in an online post.

The exam, called the Gaokao, determines if and where students will go to university.

In a poll on Chinese website Sina, 51% of users said they did not support the ban. Some users commented saying that the books belonged to the students, so it was up to them what they wanted to do with it.

Others pointed out that the students were unlikely to tear up their textbooks before their exams, and that they were simply tearing up scrap paper.

However, another Sina user pointed out they were in support of the ban, saying that the practice was a waste of resources, adding that the books could be given to other classmates or sold instead.

According to the Global Times, seven students in Hubei Province were allegedly expelled last year for tearing up textbooks and flinging them out of the school’s windows.

The school later said the students had only been warned and they would still be able to take the exam.