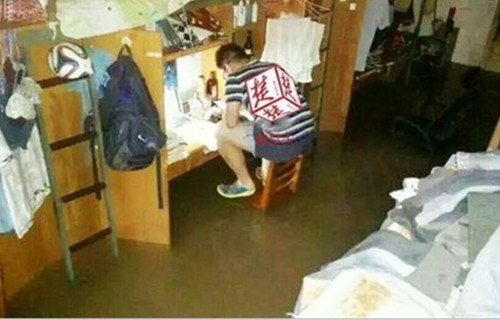 If you thought you were hardworking, you might want to think again.

A picture of a Chinese university student in the city of Wuhan apparently studying hard at his desk surrounded by murky flood water has surfaced on Chinese micro-blogging site Weibo.

The city of Wuhan has been placed on red alert for heavy rainfall, after torrential downpours left parts of the city submerged and some state media estimates suggest flooding has killed more than 180 across China.

This young man is reported to be a student at Wuhan University and was said to be studying for exams when water started coming into his room. He then simply moved to squat on top of his chair as it continued to rise.

Reports say he later left the room in search of higher ground when water levels reached the height of his desk, returning only when the water had receded.

Local media pounced on the image lauding the young man’s apparent dedication to his studies, a paragon of studious virtue.

"His roommate commented that the exam he is taking is very difficult," reported the Chutian Metropolis Daily. "But he has had a history of good results."

Many reported that he was looking to head overseas after graduation, and so had much invested in these exams.

But netizens on Weibo were not all so kind. Some took jabs at the picture and suggested it might have been staged.

"Alright, you can turn around now that the picture’s taken," said one netizen.

"Who took the photo? He’s just as skilled," asks another.

"Is he actually watching Harry Potter?" another Weibo user posted.

Another user simply pointed out that the student could surely have just "brought the books and gone upstairs".

Perhaps the final word should be saved for this poster: "Oh man, I should really go study too."