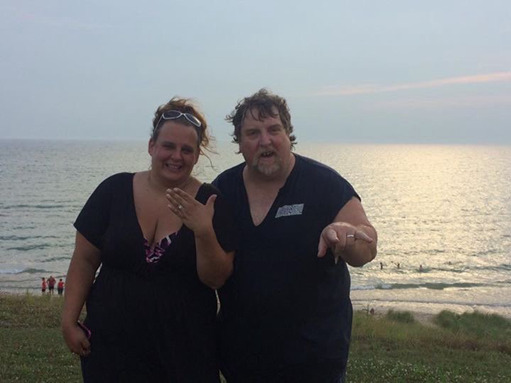 One woman is lucky to have her diamond engagement ring back on her finger after it was missing for two days in Lake Michigan.

Jamie Kennedy was having a delightful beach day in South Haven, Michigan, with her two young boys and close friend when the fateful moment happened. Her ring was lost but found 48 hours later thanks to a complete stranger with a helpful hobby.

“I had reached down to get sand off my leg in the water, in about chest-deep water,” Kennedy, of Decatur, Michigan, told ABC News. “When I got the sand off my legs, it was in between in my fingers and in my ring. I pushed up with my thumb to get it out and I must’ve pushed up hard and I lost it.”

Kennedy suspects her fingers had shrunk in the chilly water.

The waves were pretty large that day so their efforts turned up empty. Disappointed, they left the beach without the 1.3-carat ring. Kennedy took to social media as soon as she got home in a last-ditch effort for help.

“Feeling beyond sad, sick, and disappointed that I lost my wedding ring IN Lake Michigan today,” she wrote on the Facebook post which garnered nearly 2,500 shares. “I don’t usually believe in miracles but if anyone sees any posts on Facebook or hears anything about found rings in South Haven let me know.”

It didn’t take long before her post was shared with John Dudley, the president of the West Michigan Detector Club, who immediately reached out to Kennedy with his expertise.

“She lost it on a Friday and I didn’t go out until Sunday. It was 2 days later, which makes it even more bizarre,” Dudley said of the successful search. “The waves were terrible. I’m a pretty good-sized guy and the waves were knocking me over. But 30 to 45 minutes later I got a good signal in the water about waist deep. I scooped up whatever the signal was and there was a ring in the bottom. I went, ‘Oh my gosh.’

“When I turned the ring over I knew it was hers because she had shown me a few pictures,” he added. “I gave a thumbs up to her and she just came running out to the water. I gave her ring back and she just started bawling and gave me a great big hug.”

“I seriously think my heart skipped a beat,” she recalled. “I jumped up and ran out there. When he first gave me a thumbs up I thought maybe had detected something, and then after he held my ring up I just ran. He said I practically walked on water to get out to him. I instantly I started bawling of course.”

Not only was it an incredible day for Kennedy, who said she does believe in miracles now, but it was also quite an accomplishment for Dudley, as well.

“It was pretty huge actually,” he said. “You find things, coins, and you find jewelry on occasion in the water. You find lots of pieces of miscellaneous garbage, but when you know something is there and you can find it and return it, it’s like bowling a 300 game. I think this is the best by far.”

“When I put it on Facebook I said, ‘I don’t usually believe in miracles,’ and now I know there’s always hope,” a grateful Kennedy added. “Miracles can happen and there’s still nice people in the world. It’s just amazing to know there’s so many good people still out there.”