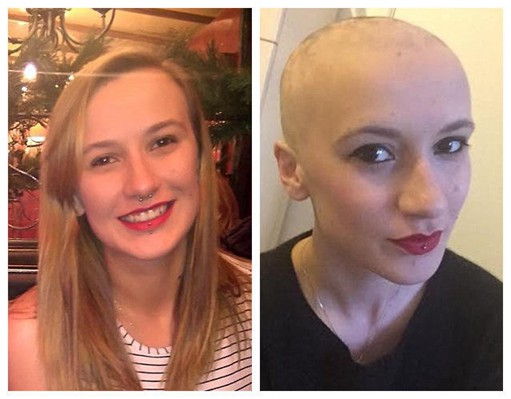 A student lost all of her hair within just two months as a result of stress from her upcoming university exams.

Katie-Anna Moore, 20, previously had a thick head of mousy blonde hair, which she called her ’pride and joy’.

But in the run-up to her summer sittings at Bournemouth University, she began to go bald.

In March this year, while in the shower, she was putting shampoo on her hair before a whole handful came out.

Small clumps would then come out each time she washed her hair and within just eight weeks, 70 per cent of her locks had gone.

Within two weeks, other people began noticing, and she would find her clothes covered in stray hairs.

After visiting her GP following the end of her exams, Miss Moore was diagnosed with alopecia areata, an autoimmune disease where bald patches appear on the body or scalp.

Her doctor told her the condition was most likely stress-induced and warned it was likely she would lose the remainder of her hair.

’I was crying all the time and didn’t want to talk to my friends or tell the university what was going on.

But even with her exams out the way, she was still experiencing constant hair loss, prompting her to escape back to her father’s house.

She said: ’I was ringing my mother every day for advice as she is my best friend.

’Then I went back to my GP surgery and as soon as I took my hat off, the doctor’s face said it all.

She couldn’t believe she was losing her hair at what was supposed to be the prime time of her life.

So, she decided to seize back control and take a pair of clippers to the remainder of it.

At first, her father was hesitant to help her shave the rest of her hair off, but he understood it was what she needed to do.

Walking through campus, she said she could feel people staring.

’If I’m surrounded by friends, they reassure me I’m beautiful, but it’s when I’m alone that I feel shy.’