Abandoned by his mother and bullied by his playmates, giant panda Qizai (七仔) had a hard childhood. However, the adorable bear, currently seven years old, has grown to be a superstar in the animal world; for he has proved that when it comes to a panda, it's not always a case of black and white. 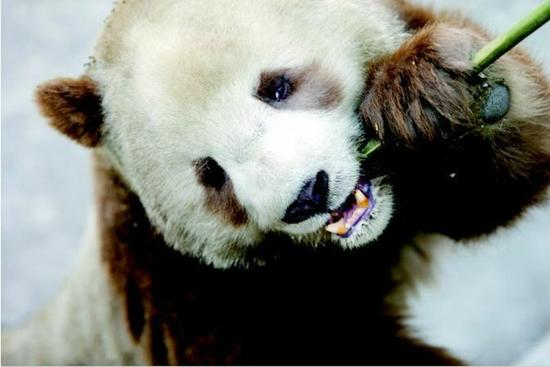 Qizai was found as a weak and neglected cub in a nature reserve in the Qinling Mountains (秦岭自然保护区) in China. His mother was black and white. Therefore, the fact that Qizai has a brown and white coat is even more intriguing.

Despite his tough childhood, Qizai is now enjoying a good life at the Foping Panda Valley (佛坪熊猫谷) in Shaanxi province. He weighs more than 220 pounds and eats around 44 pounds of bamboo every day. He Xin, his personal care-taker, spends up to 18 hours a day looking after the bear, getting up at 6 a.m. to feed him bamboo and going to bed at midnight after making sure that the panda sleeps well.

"He is slower than the other pandas, but he is also cuter," said Mr. He, adding that Qizai was a "gentle, funny and adorable" animal.

Despite his unfortunate childhood, Qizai has grown into a fine specimen(样本). Chinese experts are planning to find him a mate to get a step closer to solving the brown fur mystery by observing and studying the appearance of his offspring.