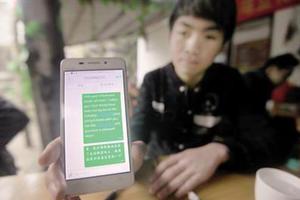 A food delivery courier in Sichuan recently became an internet sensation after it became known that he messages his customers in English.

The courier, named Mao Shaomu, is just 18 years old. He came to Sichuan International Studies University (SISU) to be a courier at the beginning of March. Mao told Chongqing Morning Post that the English messages he sends to customers are a way for him to practice English, since he expects that SISU students can all speak English.

Mao struggled in science classes beginning in his middle school years, but he always excelled in English. Inspired by his English teacher, who earned a university spot through independent study, Mao chose to formally drop out of high school. Ever since, entering SISU has become a target for the young man.

Each job Mao took after quitting high school was temporary because he always wanted to study English. Last September he took a part-time at a bar, hoping it would give him the chance to chat with foreigners. At the beginning of March, he quit his job again and became a food delivery courier at SISU, all the while preparing for the college entrance exam, which will be held in the second half of this year.

These days, midday is the busiest time for Mao, and he uses most afternoons to study English. He said his preference is to major in English or international communications. In addition, he hopes to go to Beijing to earn a master’s degree and become an interpreter.