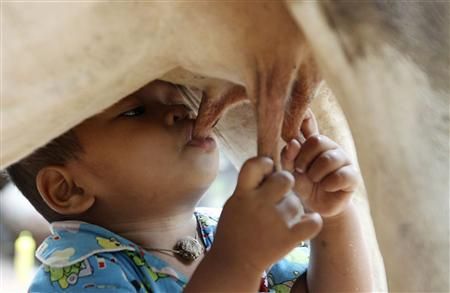 An 18-month-old Cambodian boy who has suckled milk directly from a cow daily for more than a month is in fine health.

The boy, Tha Sophat, made international headlines after his grandfather revealed he had been feeding himself directly from a cow since July when a storm destroyed his home and his parents left for Thailand to find work.

After he stopped breast-feeding from his mother, the boy became ill, said the 46-year-old grandfather.

The boy watched a calf nurse from its mother, and began to do the same thing, feeding directly from the cow each day. When he pulled him away, the boy cried, so he let him continue.

Neighbors and local officials in the village in Siem Reap Province, about 315 km (195 miles) from the capital Phnom Penh, say they are not happy about the nursing.

"They blame me and have told me not to allow him to suckle from the cow anymore. They say the boy will be ashamed when he grows up and that he will be naughty," the grandfather said.

Since Saturday, he has limited the suckling to once a day.