In the programme, Greg explains how he thinks Twelfth Night differs from Shakespeare's earlier comedies. He also discusses the significance “β“ε of twins ΥΪΑϊΧΞ and cross-dressing ≈°ΑγΡ–ΉΑ/Ρ–Αγ≈°ΉΑ in Shakespearean comedy. 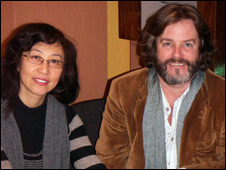 As you listen, try to answer these questions. The answers are at the bottom of this page.

2. What is Greg's simple definition of Shakespearean comedy and tragedy?

3. Why does Greg find the end of Twelfth Night very moving Ε·»ΥΒΡ?

Twelfth Night has a very famous opening speech from Duke Orsino, which perfectly captures ΉΞΉΓΝΥ the play's themes of love and obsession ≥Νδœ/Ο‘ΝΒ. You can listen again to this speech by clicking on the audio link to the right.

You will also hear Greg quoting ‘°“ΐ/“ΐ ω one of his favourite lines from A Midsummer Night's Dream, as well as the excerpt from this week's S Words clip. The bbcukchina actors are Amy Ewbank and Benjamin Scheck.

Click on the pdf link to read the excerpts ―ΓΈΡΓΘ

Next week we complete our focus on Shakespeare's genres ΈΡΧεΖγΗώ with a look at his tragedies. Yang Li and William discuss one of the Bard's shortest and darkest plays ®C Macbeth.

Answers to the quiz:

3. Shakespeare's son Hamnet was a twin. Sadly he died when he was eleven. However, Shakespeare was able to reunite Ά≈Ψέ his twins on the stage ‘ΎΈηΧ®…œΓΘ

Greg, who is a twin himself, finds that very moving.