Print Your Own Lunch 轻松打印美味佳肴

Is 3D Food Printing the Future of Cooking? 3D食物打印机替你下厨？

Lunchtime in the office. Perhaps you've brought some of last night's leftover stir-fry from home, or some takeaway dumplings from a stall.

Or perhaps you're sitting around the printer with your colleagues, waiting for it to produce some tasty sushi…

Sushi from a printer? It might sound far-fetched, but scientists in the field of 3D printing are working on technology that allows you to 'print' real, edible food. The team from Cornell University in the US hope their machine will one day be as commonplace as the microwave oven or blender. 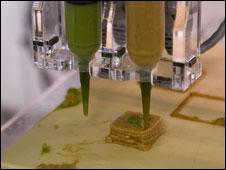 So how does it work? Instead of having cartridges filled with various coloured inks, the 3D food printer has rows of syringes filled with different ingredients. It then deposits these food inks line by line, and layer by layer, according to the electronic recipe, until the finished product is made.

So far the team have made biscuits, cakes and even a scallop-based snack in the form of a space shuttle.

Chef Homaro Cantu, who has printed sushi using an inkjet printer, thinks the technology could also be good for the environment.

"Imagine being able to essentially 'grow', 'cook' or prepare foods without the negative industrial impact - everything from fertilisers to sauté pans and even packaging. The production chain requirements for food would nearly be eliminated."

He believes that the technology could revolutionise the way we eat, and even bring people closer together.

"3D printing will do for food what e-mail and instant messaging did for communication," says Mr Cantu.

"What if you could have Mum's homemade apple pie sent via e-mail and printed up at home? Her apple pie becomes as close as an instant message on Facebook."

Whether or not the technology is successful will surely depend on what the food tastes like. As they say, the proof of the pudding is in the eating.