What do you expect when you go on holiday? Probably to relax, have a good time and above all, stay safe. 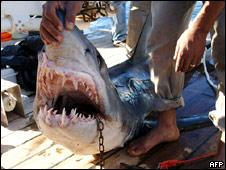 You don't want to meet him when you are swimming

Sometimes natural disasters, such as a hurricane or an erupting volcano, may put a stop to your holiday plans. But holidaymakers at the Red Sea resort of Sharm el-Sheikh in Egypt are facing a problem of a different kind.

The resort is popular with British tourists who go there for the golden sands, warm sea, and for the excellent scuba diving. But at the moment they are not venturing into the water because of a series of attacks by sharks.

One person has been killed and several others have been injured in the attacks over the last few weeks. According to Ian Fergusson, a shark biologist, these sharks, "Oceanic White Tips, frequent the region but it was unusual for swimmers to encounter them in shallow waters".

What has lured them into these waters and attack people is still a mystery but experts agree that attacks are extremely rare and that they are not the man-eaters depicted in Hollywood films like Jaws.

One thought is that animal carcasses were recently dumped into the sea from a ship close to the shore. Ian Fergusson says: "If you start dumping carcasses, you couldn't ask for a better way of baiting for sharks".

He also says that "they are opportunistic and it could just be a case of people being in the wrong place at the wrong time".

The thought of a shark attack might make you think twice about taking a dip in the sea but research by the University of Florida found there are estimated to be between 70 and 100 attacks on humans per year and only a small number are fatal.

Mark Murphy, who runs a scuba diving company, is worried about how the authorities will control these sharks in the Red Sea. He points out that "over 70 million sharks a year are killed by humans and they are an essential part of the marine ecosystem".

What is clear is that finding the predators behind these attacks in Egypt is going to be very difficult.