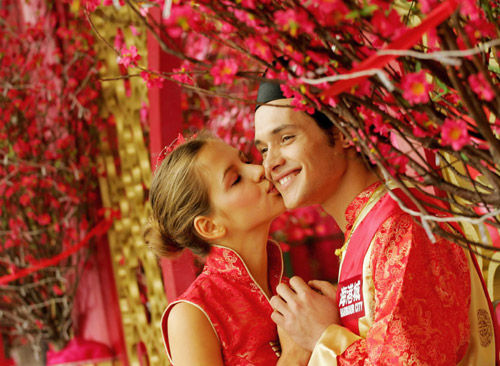 Slater and Emma are an American couple that have lived in China for four years. They are both English teachers. Slater is thin and has short-hair. He is quiet but amiable. Emma, on the other hand, is talkative and likes to laugh. Blonde and brown-eyed, Emma looks like the typical American girl next door you see in the movies。

Emma begun studying Chinese a year ago; however, she has made amazing progress. Aside from her excellent pronunciation, she has mastered nearly 1,000 Chinese words. She says she finds the best way to improve her spoken Chinese is to communicate with strangers. She often goes to squares or parks and starts up conversations. For instance, if she sees an older woman with her grandchild, Emma will start with saying how cute the kid is. She says that Chinese people, although usually a bit shy at first, are very easy to talk with。

Although Slater speaks only a little Chinese, he is more knowledgeable about Chinese customs and culture, including the unspoken rules of interpersonal exchanges. When having conversations with Chinese people, Slater will interpret a person's meaning and tell Emma, who will then respond accordingly。

Emma studied medicine in college, while Slater’s major was graphic design. Due to the economic recession, he could not find a suitable job after graduation, so after graduating he worked as a cashier in a grocery store. This must have been pretty boring for a young, educated man. Thus, when one of his friends asked him if he was willing to take on a teaching position in China, Slater jumped at the chance。

At the crossroads of life, shy Slater proclaimed to Emma: “Marry me, and we can go to China together, or I will go by myself!” Emma replied: “Alright!” When her mother heard of this she was not happy. But Emma eventually talked her round. “When we grow up, our parents become more our friends rather than our parents,” she said。

Although, Slater and Emma were born and grew up in the United States, they don’t come across as typical Americans. To begin with, they are both vegetarian, they like Chinese vegetable dishes, but are particularly keen on Chinese tofu. Each time they return to the States, they said they miss tofu very much。

They said that although they found it easy thing to make friends back home, in China it is much easier and friends stay in touch, unlike in the US friends might not be in contact for years。

“Say I'm pregnant. In certain cases I might need help. In America, I could maybe call just two or three friends to help me. But in China, I could easily find thirty! That’s one of reasons that I like China,” Emma said。

And unlike many Americans, they save money. Emma says that her generation emphasizes saving money. Their modes of consuming are different compared to their fathers. One of the reasons is the heavy burden of repaying a student loan. After the age of eighteen, most Americans start living independently. The majority of college students take out loans in order to pay their tuition and fees. On average, it takes graduates fifteen years to pay off debt. Emma proudly says that Slater has already paid back half of his loan in just four years。

While her Chinese counterparts save money to buy their own homes, Emma says that many Americans her age don’t save money for a home。

“We are not willing to buy houses,” she says. “Consider my parents: They bought their large house on a bank loan. Now, the value of their house has slumped so much that it's below the sum of their loan。”