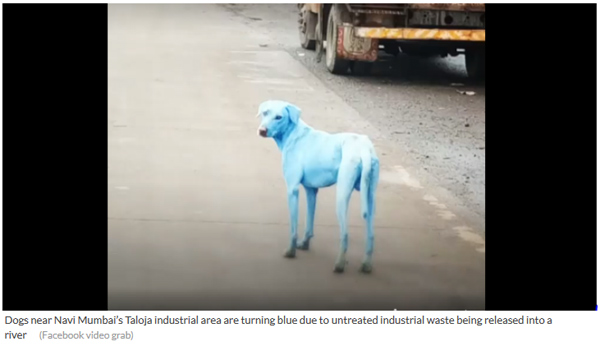 Dogs in the suburbs of India's financial capital Mumbai are reportedly turning blue due to untreated industrial wastes being released into a river. Stray dogs near Navi Mumbai's Taloja industrial area often wade into the Kasadi river for food and water.

On Wednesday (August 9), the Navi Mumbai Animal Protection Cell took pictures of a dog that had turned blue.

The group filed a complaint with the Maharashtra Pollution Control Board (MPCB) on Thursday, saying the untreated waste that industries were releasing directly into the river was causing suffering to the animals.

Taloja is said to have nearly 1,000 pharmaceutical, food and engineering factories.

"It was shocking to see how the dog's white fur had turned completely blue," Arati Chauhan, resident of Navi Mumbai who runs the animal protection cell said. "We have spotted almost five such dogs here and have asked the pollution control board to act against such industries," she added.

In August 2016, fishermen were concerned that the polluted river water was affecting the fish in it. Quality tests conducted on samples collected from the common discharge treatment plant that 300 industrial units use to treat their waste showed that waste treatment was inadequate.

The levels of biochemical oxygen demand (BOD) – the concentration of oxygen required to sustain aquatic life – was 80mg/L. High levels of chloride, which is toxic, have harmed vegetation, aquatic life and wildlife. According to the Central Pollution Control Board guidelines, fish die when the BOD levels are above 6mg/L and levels above 3mg/L make the water unfit for human consumption.

The untreated industrial waste pumped out by these industrial plants had increased pollution levels in the Kasadi river to 13 times the safe limit, the Hindustan Times reported.

"After numerous complaints to MPCB over the years, only the stench at Kasadi has reduced. However, the pollution levels continue to be extremely high and dissolved oxygen is negligible," Yogesh Pagade, member of a local fishing community that had conducted the study last year said.

MPCB officials said they had taken cognisance of the complaint. "Allowing the discharge of dye into any water body is illegal. We will take action against the polluters as they are destroying the environment," the board's regional officer Anil Mohekar said. "We have directed our sub-regional officer to investigate," he added.

Animal rights activists are wondering if the move has come a bit too late, "We have only spotted blue dogs so far. We do not know if birds, reptiles and other creatures are affected or if they have even died owing to the dye discharged into the air," Chauhan said.