An 11-year-old boy from Germany has caused a domestic incident by claiming he's the victim of forced labour because his mother asks him to do the chores. 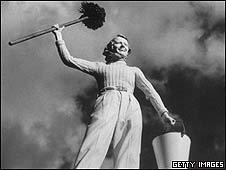 Not everyone is so joyous about housework.

The youngster even called a police emergency line to complain he was being treated like a slave after his mother told him to clean the home and terrace.

Household tasks such as washing up, dusting and hoovering are mundane for all but the tidiest amongst us. But this young boy's actions have made it clear just how much he hates housework.

Police say the youth from Aachen, who has not been identified, spoke to an officer on the 110 number. Clearly unwilling to carry out dull and soul-destroying jobs, he said: "I have to work all day long. I haven't any free time."

His mum replied: "He plays all day long and when told to tidy up what he's done, he calls it forced labour." She also revealed that he'd been threatening to call them having repeatedly complained about having to lend a helping hand around the house during the summer holidays.

Lots of kids are reluctant to muck in when it comes to cleaning, but how can they be motivated so parents don't end up working their fingers to the bone? Perhaps pocket money is a good incentive. A financial reward is often a good way to get people to put a bit of elbow grease into their jobs.

Or maybe if he understood the true meaning of 'forced labour' he'd stop complaining about being treated like a skivvy!