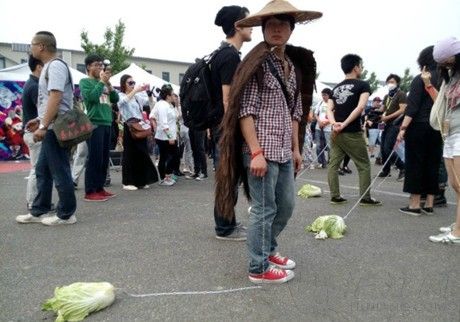 Photo agency Europics claimed last week that teenagers photographed at Beijing's Midi Music Festival "walking" cabbages on leashes were doing so as a means to cope with loneliness and depression. However, according to That's Mag, the cabbage-walking was merely a performance art piece。

The performance was based on the work of Chinese artist Han Bing, whose photo series, "Walking the Cabbage," depicted him dragging a leashed cabbage in various locations。

According to Europics, the teens in the photographs at the Midi festival told reporters that walking cabbages helped them cope with emotional problems。

"I feel I can transfer my negative thoughts about myself to the cabbage, go for a walk with it and come home feeling better about myself," 17-year-old Lui Ja Chen was quoted as saying。

It's unclear whether the teens really saw some therapeutic benefit to the cabbage-walking, or they were just messing with reporters。

Another 17-year-old, Da-Xia Sung, reportedly said "I have more interest for my cabbage than I do my parents. I feel it understands me."