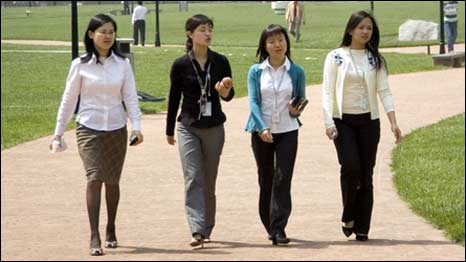 What should you wear to work?

If you're a T-shirts and jeans kind of a person, then here's some statistics worth knowing.

According to the Reuters poll, you should head to Hungary for a job, given that a mere twelve percent of people there dress smartly for work.

India on the other hand might be a trickier proposition, with nearly six in ten Indians wearing formal clothes in the office.

As a rule it seems Europeans are scruffier, whilst workers in South Korea, China, Turkey and Saudi Arabia all tend to make more effort.

If you want to don a pair of shorts in the office, then nearly half of all Australians asked think that's fine.

However a mere tenth of Brazilians would agree.

Russians too would disapprove, although with the heatwave Moscow is experiencing, the temptation must be great.

And what happens if you want climb the corporate ladder?

Around two thirds of people believe senior managers should be smarter than their minions.

In Sweden you're less likely to be judged on what you wear on your way to the top.

But in France you might find the corridors of power closed to you if you intend to slouch down them wearing whatever you could find that morning.