The Meaning of Sleep 睡眠的意义 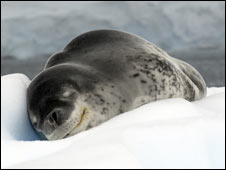 Perfectly adapted to sleep in the snow

Pythons, bats and giant armadillos are among the longest sleepers at over 18 hours a day. Human babies need 16 hours, and most of us probably feel we need around eight hours sleep to function well.

Professor Jerry Seigel, from the University of California, Los Angeles, conducted a study of the sleep times of a broad range of animals, and found that they vary widely. Some, like migrating birds, can survive long periods without sleeping at all. He believes that shows sleep evolved to conserve energy:

Sleep helps make best use of limited resources. In humans, when we're awake, our brain accounts for 20 percent of the energy we use when just sitting around. Sleeping also makes us less likely to get injured and less likely to be detected by predators.