Get On Your Bike 大家都来骑自行车

A Bike Hire Scheme Has Started in London 伦敦开始自行车出租计划

London has become a cycle friendly zone after the launch of a new bike hire scheme.

It has been designed to encourage more people to cycle in and around central London.

So how does it work? First you have to sign up to the scheme to be sent a key. The key will unlock one of the bikes, which are kept at docking stations in and around central London. You have to pay an access fee for the key and then you pay as you go, for the length of time you use the bike.

Transport for London, which runs the scheme, are hoping to have 6,000 bikes and 400 docking stations in place by the end of the year.

The new hire system is hoping to ease congestion in London and is expected to generate up to 40,000 extra cycle trips a day into the city centre. 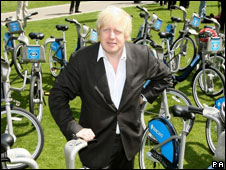 London Mayor Boris Johnston launched the scheme and said London had been "filled with thousands of gleaming machines that will transform the look and feel of our streets and become as commonplace on our roads as black cabs and red buses".

However, there have been a few glitches since the scheme was launched last Friday. On the first day some people found they couldn't dock their bike properly and their usage of the bike had not registered.

Transport for London did admit they had been expecting a few "teething problems" and have said they would waive the charges for the first day as a "gesture of goodwill".

Some other people have criticised the lack of docking stations and locks for the bikes as well as the price it costs to hire the bicycles.

Despite the comments, the green-thinking London Mayor still seems very positive about things, saying, "My crusade for the capital to become the greatest big cycling city in the world has taken a gigantic pedal-powered push forwards."