Some Species Threatened with Extinction 一些蝴蝶种类面临绝迹

The British summer is extremely beautiful. Trees, flowers, birds and butterflies make the whole country like a big garden. However, many British people have noticed that butterflies have been gradually disappearing from this picturesque scenery during the past several years. What has happened to them?

Butterfly Conservation, a charity in the UK, is running a survey to help answer this question. The result is more serious than people expected. According to the survey, among 59 butterfly species found in the British Isles, more than three-quarters of them are suffering a declining population, including the most popular Meadow Brown. Moreover, half of all butterfly species are on the verge of extinction.

Some common species such as the small Tortoiseshell butterfly and the Wall butterfly are dropping dramatically. The latter cannot even be seen in many parts of central and southern England. 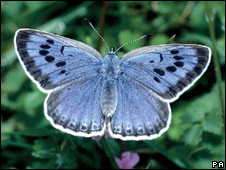 The Blue butterfly, which was commonly seen in the south, has started colonising Edinburgh in the past few years.

The numbers of butterflies have dropped to a record low in the past three years largely because the summer in the UK is getting cooler and their habitat is also degrading.

Fortunately Britain is experiencing a long hot summer this year compared to the last few summers. Conservationists believe the warm weather will bring some benefit to the butterflies.

Sir David Attenborough, president of Butterfly Conservation, said: "Butterflies in profusion tell us that all is well with nature. When they decline it's a warning that other wildlife will be soon heading the same way."

The survey is still going on. The public is also encouraged to keep track of the UK's butterfly population. The organisers hope the survey will help raise public awareness of the value of butterflies in the UK. Butterflies give an indication of the well-being of nature and the environment.