They have frightened some and enchanted others. They are Wenlock and Mandeville, mascots of the London Olympic Games.

The one-eyed figures join the large family of mascots that includes the Five Fuwa of Beijing (2008), the bear Misha of Moscow (1980) and many others.

Wenlock is the name of the English village considered by many to be the birthplace of the modern Olympics. People think its local games inspired Baron Pierre de Coubertin, who founded the International Olympic Committee.

The other mascot's name is a reference to the village of Stoke Mandeville, where the Paralympic movement began.

The duet of mascots is a central part of London's merchandising strategy and will feature in everything from T-shirts to tea towels. No doubt they will be seen under children's arms as cuddly toys. 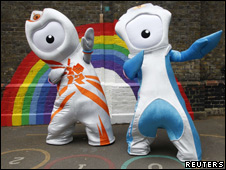 The Olympic mascots will be visiting schools

Some adult commentators think that the mascots are creepy and might scare youngsters.However, children were consulted during their creation.

The organisers of the Games are keen to avoid another controversy like the one that surrounded the unveiling of the puzzle-style Olympic logo in 2007. It was criticised by a sceptical British public. The video used to promote it was even claimed to trigger seizures in a few people.

Young fans like their mascots to come with a backstory. Children's author Michael Morpurgo came up with the idea that the mascots origin,was from the last drops of molten steel left over from the construction of the Olympic Stadium.

Adults and organisers might argue but the most important audience for Wenlock and Mandeville are children. Ten-year-old Kira, from Essex in England, wrote to the BBC to say: "I think it is wicked! I love the Olympics and so does my sister!"