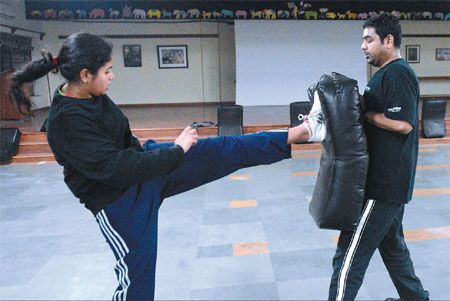 A woman spars with a trainer during a self-defense class in New Delhi, where the gang rape of a woman in December has many women worrying about their safety. (AFP)

After nearly three weeks of lurid reporting on a horrifying gang rape in New Delhi, women in the Indian capital say they are more anxious than ever, leading to a surge in interest in self-defense classes。

New Delhi has long been known as the "rape capital of India", with more than twice as many cases in 2011 as the commercial hub Mumbai, and special care is taken by most women when traveling at night or on public transportation。

But the gang rape on Dec 16, in which a 23-year-old student was repeatedly violated on a moving bus and assaulted with an iron bar, has brought concern to new levels amid increased focus on the city's safety record。

"There has been a certain surge in the level of demand for services like self-defense and personal protective training," Sharma said at a class in a school hall, echoing comments from other martial-arts experts in the city。

In the classes, Sharma teaches her basic self-defense, including how to squirm free from the grip of an attacker and disable them with a punch or kick to the groin。

Across the sprawling city of 16 million, shopkeepers say sales of pepper spray and rape alarms are up, while many young women report that relatives have become more concerned than ever about their welfare。

In the outsourcing industry, rocked by a rape and murder of an employee late at night in 2005, some companies have begun providing extra security to female employees who work late shifts。

"After the New Delhi incident, we ensure that at least one security guard is present in our late-night cabs," said Anurag Mathur, a human resources executive of a New Delhi-based company。

As anxiety takes root, in which many cases women simply stay at home more, activists have raised their voices to condemn the government for failing to offer protection。

"Why should we live in a society where every woman is made responsible for her own security and safety? What we need really is a system which will protect us," said Ranjana Kumari of the New Delhi-based Center for Social Research。

However, statistics show that any self-defense techniques are most likely to be needed against a family member or neighbor, with more than 95 percent of alleged perpetrators in rape cases being someone known to the victim。

There were 24,206 cases of rape registered in 2011 in India, according to the National Crime Records Bureau, but this is thought to be gross under-representation of the problem。

In the cities, 17 percent of cases were recorded in New Delhi, compared with 8.6 percent for Mumbai。