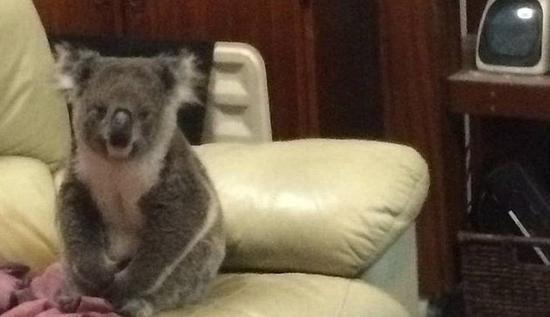 A couple has been left lost for words after coming home to find a furry house guest taking up residence on their couch.

Michele Goodman and Vicki Haines, returned to their Soldiers Point home in the New South Wales region of Port Stephens on Tuesday night to find a koala warming himself up in front their heater.

We just arrived home and there he was just sitting there, he looked exactly like he was watching TV,’ Vicki Haine told Daily Mail Australia.

While the koalas appears cute and cuddly, they have been known to act aggressively, especially when feeling threatened.

’The dog was barking at him and I could see him get his claws ready to attack the dog,’ Vicki said.

’I wasn’t too keen to get to close to him, he is a wild animal after all.’

She added she was surprised that the koala hadn’t torn up the couch with his long claws, which made her think he had a look around the house before choosing his spot on the couch.

Vicki’s partner Michele Goodman had her bike with her when they entered the room and positioned it between herself and the koala to protect herself, before turning to Vicki to figure out what to do next.

After a couple of calls, they got in touch with the Hunter Koala Preservation Society.

We called them and it was late at night at this point, but they got out of their beds and came to help us.’

While they waited 90 minutes for the koala to be collected, Michele and Vicki took some snaps of their furry house guest, whom they named ’Tuff Bugger’.

’We tried to get photos of ourselves with him, but we were a bit scared to get close,’ Vicki said.

’Michele got this photo of herself as we were standing outside and keeping our distance. He’s sitting on the lounge and we’re out in the wind and the cold trying to get a selfie through the window.’

Rescue eventually came in the form of Simone Aurino and her son, Mason.

Speaking to the Port Stephen Examiner, the wildlife warriors safely caged the marsupial, who had entered the home through the dog door.

’Finding them in homes is becoming more and more common because there isn’t the connectivity of habitat there once was,’ she told the Examiner.