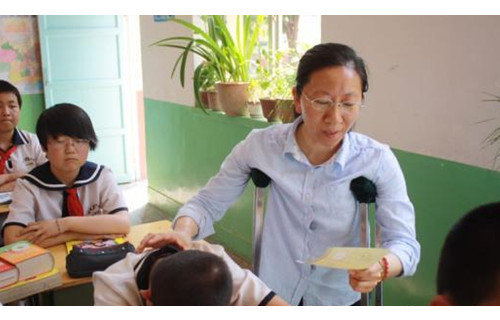 Zhang Lanping has been teaching for 33 years now, but what makes her special is her pair of crutches.

The courageous teacher from Gansu province was afflicted by poliomyelitis, an infectious disease caused by poliovirus, when she was only one-year-old.

Zhang was not able to fully recover and therefore has to use crutches for the rest of her life.

This condition, however, has not diminished Zhang’s spirit.

As a student, Zhang devoted herself to acquiring knowledge, which she believes would make her a successful teacher.

After graduation, Zhang applied as a college teacher but she was turned down because of her physical disability.

Zhang did not give up and was finally accepted as a primary school teacher in her hometown in Gansu province, which then experienced a shortage of teachers.

For able-bodied people, it takes only six minutes to reach school, but Zhang has to spend one hour from home to her work place using crutches.

Zhang recalled that one winter day, she slipped and fell in snow, but still managed to reach school on time.

Zhang’s efforts have not been in vain as the academic performance of her students is among the best in the district.

In 2002, Zhang launched a charity foundation funded by philanthropists from Guangdong and Hong Kong.