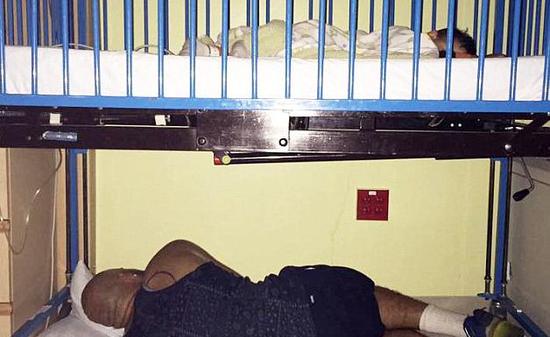 A sweet photo of a Pennsylvania father sleeping under his sick son’s hospital crib has gone viral, touching the hearts of thousands.

Amy Palmer posted the image of her husband, Andre, and their toddler son Andre Jesse (AJ) to Facebook on Tuesday after the child suffered an asthma attack that sent him to hospital.

The photo shows the boy asleep in a blue crib while his father sleeps underneath, curled up on the hard hospital floor while lying on a pillow.

’This is a picture of a hard working man dedicated to his family,’ Mrs Palmer wrote in the caption.

’After working all night third shift, he’s right here with his son who is in the hospital.

’He’s so tired but he’s here!! Father of the year award goes to Andre Palmer!!! I love you more than words baby.’

After sharing the photo on Tuesday, it had garnered nearly 4,000 ’likes’ on Facebook by Thursday afternoon.

Mrs Palmer said the hospital room where her husband and son slept was so small the only thing that fit was the crib and a chair bed.

She said in a comment on the post that at the time her husband had gotten off work early in the morning, had just dropped their daughter off at daycare and was still half asleep when he lied down.

He had worked the graveyard shift, from 11pm to 7am, according to ABC News.

’All this shows the amazing husband and father he is!!!’

She said she did not let him sleep there for long, making him get up so he could lay on the chair bed where he ended up sleeping.

’Thanks for all the prayers and thoughts, our little man was discharged this afternoon and is now resting at home. And daddy is sleeping, getting his rest for a 12 hour shift tonight,’ she wrote.

On Thursday, Mrs Palmer shared another Facebook post saying she was overwhelmed by all the kind people who have reached out and have been touched by the photo.

She explained she had snapped the photo because she thought her husband’s action was selfless.

She also noted that the hospital was amazing during their time there and that she believes if they had known he was sleeping on the floor, they would have offered him something.

’Our son is doing much better and is now at home resting. Thanks again for all of the support, we truly are so appreciative!!!!’

Mrs Palmer told ABC News that her husband does everything he can for their family.

’You just take it for granted, and then something like this happens and you see how much it touches so many people,’ she said.