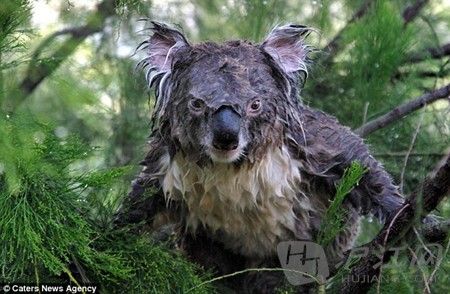 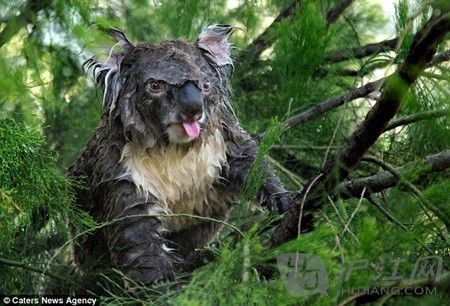 They're known for their love of sleep, so it's not surprising this koala was far from happy when it was rudely awakened with a drenching from a garden sprinkler。

The furry creature, which rests for up to 18 hours a day, was fast asleep in a tree when it was soaked by a gardener watering his trees。

And as these images show, the koala was more than a little peeved at its unexpected soaking。

The images were taken by Matt Wilkinson, 39, in the garden of his home in Adelaide, Australia. He said: 'There was a particular bad heatwave in Adelaide recently and temperatures reached up to 40C。

'The koalas hang around in a tree in my garden when it is hot, it's on the southern side of the house and relatively cool。

"We use the sprinklers and garden hose to wet the house and surrounding trees when it's hot to avoid a bush fire but when I watered one of the trees, this koala got a bit of a soaking.'

But while the koala may look far from happy about his soaking, Mr Wilkinson said it would have helped it cool off. He said: 'It was a boiling hot day so I'm sure it helped the koala cool down。

'Koalas usually don't need to drink, as they get their moisture requirements from gum leaves but on that day, the koala's were licking at the trunk of the tree where the water was trickling down. They were quite thirsty.'

After accidentally drenching the animal, Mr Wilkinson quickly grabbed his camera before heading to the end of his garden to take these pictures。

'Either the koala was curious, or wanted to thank me, as it climbed out along the tree branch and stayed at the end of it just looking at me. It even stuck its tongue out which helped me get some great photos.'