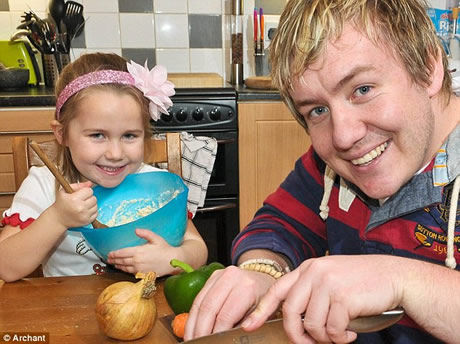 An amateur chef, who just three years ago was incapable of even frying an egg, has been signed up by Jamie Oliver after videos of him learning to cook with his daughter became a YouTube hit。

Barry Lewis, 30, used to live on a diet of takeaways and junk food but decided to learn to cook with daughter Phoebe, three, and posted videos of their efforts online。

Mr Lewis is now taking a break from his job as a quantity surveyor to pursue a career in cookery. Jamie, 37, announced the news in a video on his YouTube channel last week, singing the praises of enthusiastic Barry, from Worle, Somerset。

He said: 'He's a proper dude, he's a dad of two little girls. He's a regular guy - he's not a chef and he's not formally a cook, and he was a virgin in the kitchen。

'I just love his energy. He loves to have a laugh, he does crazy things sometimes。

'The cooking is getting really good and I just love his enthusiasm for food and having a laugh and for family and I think at the end of the day that's what food is about. 'Viva Virgin Kitchen.'

He said: 'I couldn't cook a thing and I wouldn't even go in the kitchen at all.'

'As part of the Big Family Meal he was preparing, Jamie poached an egg and I thought it looked just about easy enough for me to try.'

He has since created over 400 videos and has his own website www.myvirginkitchen.com。

Barry, who lives with girlfriend Rebecca Gardner, Phoebe, and youngest daughter Chloe, one, said: 'It just snowballed from that first film。

'I uploaded poached egg on toast and it has gone mad ever since. It has become more than just a hobby, so I spend most weekends cooking and coming up with recipes. At the start I was getting ideas from food websites, but I soon started to get a bit more creative and a lot of the recipes these days tend to be more of my original ideas.'

'I've found it has been a really good way of bonding with Phoebe.'

Barry sent one of his videos to dad-of-four Jamie about 18 months ago and was invited to meet the renowned chef, where the pair decided to team up online。

He added: 'I never thought I'd ever make any money out of it。

'Everything you see me cook I am cooking for the first time - it is all about trying to inspire people who have never cooked to give it a go.'